Hidden Door Festival: Camila Cavalcante chosen as the only artist working with Photography

Camila Cavalcante is a visual artist and one of LSP keen trainers. She has been chosen to show her new project, Scar, for the first time in the UK at the Hidden Door Festival, in Edinburgh.

The festival is a not for profit arts organization that opens urban spaces as a platform for new and emerging artists, musicians, theatre makers, film makers and poets.

The festival has a public of over 10.000 and Camila is the only artist working with Photography.

Scar is an exhibition that aims to imagine the city and the landscape as a living organism, displaying the marks of its development and bringing people together within it. It consists of two series of work that use documentary photography and embroidery to capture and relate different expressions of damage.

The first series comprises of diptychs of photographs taken in the city of Puebla, Mexico. Photographs of the ‘scars’ on the structure of historical buildings are juxtaposed with images of scars on the skin of people who lived in those buildings. The photographs were then embroidered with some of the city’s visual identities and iconographies using surgical sutures. Some of the scars on the artist’s own body are mixed with those of the local people of Puebla, so that she too became part of the local landscape. 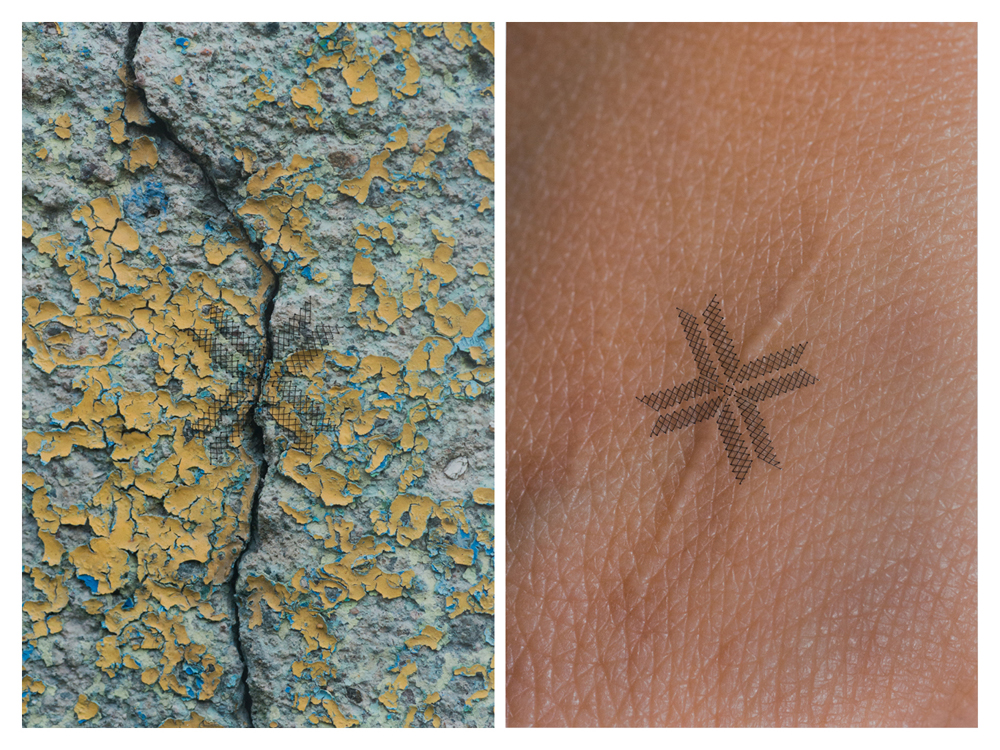 The second series comprises of two panels with 60 images of tree stumps in a harvested forest in Wales. Each photograph was taken of an individual stump from above, so that each tree, reminiscent of a fingerprint, is a scar on the landscape. Later the photographs were embroidered with Welsh wool to create the design of local wild flowers and leaves from the same forest. The 60 photographs with intricate, subtle embroidery allude to the invisibility of damage and loss.

Camila Cavalcante has a varied interest in investigating the conceptual, sentimental and social perception of art. She uses documentary photography intertwined with embroidery, collage and installation to create a place in which the idea of ‘private’ and ‘public’ overlap and complement each other; where the space is designed as an experience between the individuals who occupy it.

For more information about the artist, please visit www.camilacavalcante.com

For more on the Hidden Door Festival 2017 please visit http://hiddendoorblog.org/

For an interview with Camila about Scar: http://hiddendoorblog.org/interview-camila-cavalcante/