Exhibition: Wildlife Photographer of the Year 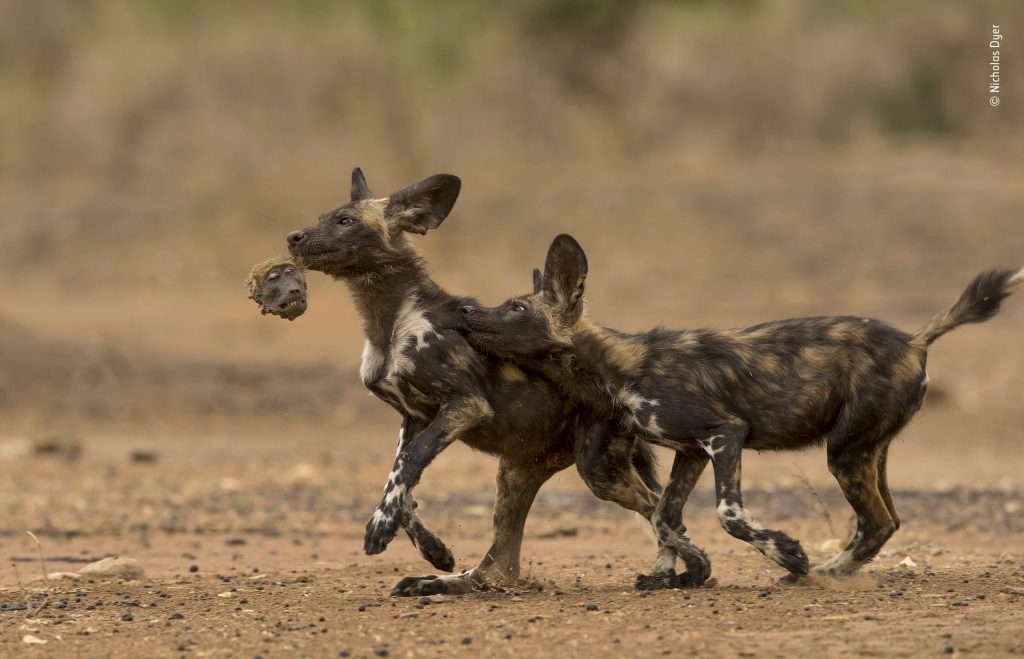 In Nicholas Dyer’s photo, at first you see a couple of African wild dogs playing, and you think, “meh, so what,” and then it hits you hard on the head like a sledgehammer and you do a double take like in a cartoon. Your jaw drops and you hear yourself saying, “whaaaaaaaat!?”
That’s because the two playful dogs are running around playing tag with the severed head of a baboon. As a rule, I want images to hit me like that all the time. It’s that wow factor, that moment that jumps out of a photo and slaps you. It’s not necessarily the composition, or the exposure, or even the colours, it’s just that small detail that makes it an incredible photo.
And the highly commended photos released by the Natural History Museum for this year’s Wildlife Photographer of the Year competition are simply stunning.
Now in its fifty-fourth year, the competition showcases extraordinary animal behaviour and the breathtaking diversity of life on Earth. Chosen from over 45,000 entries by expert judges, the images were awarded for their creativity, originality and technical excellence.
This year’s exhibition will open on 19 October, but if you feel you got what it takes to produce incredible photos of wildlife, entries for next year’s competition open on the 22nd October and end on 13th of December.
Here’s a few of the incredible photos that have been submitted for this year’s competition. 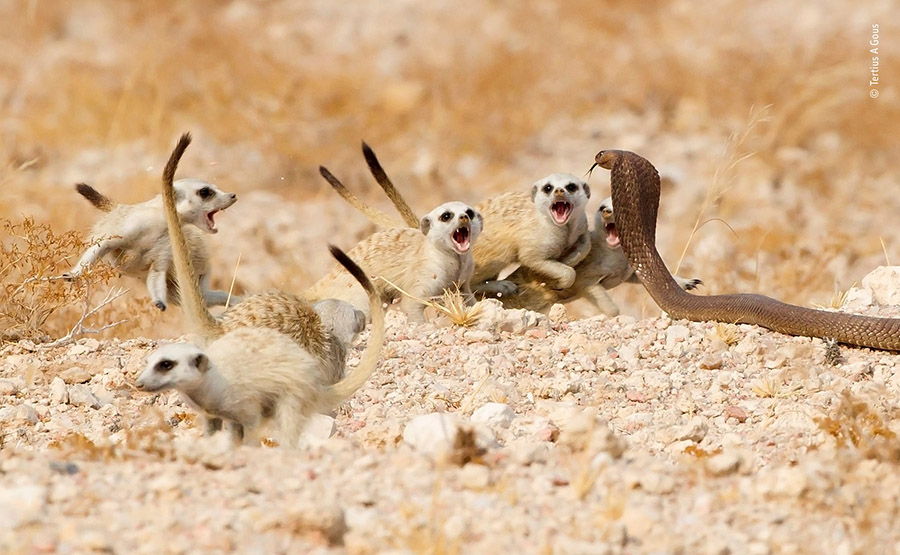 When an Anchieta’s cobra reared its head and moved towards two meerkat pups near their warren on Namibia’s Brandberg Mountain, the rest of the pack reacted almost instantly.
Rushing back, the 20-strong group split into two: one group grabbed the pups and huddled a safe distance away, the other took on the snake. The mob edged forwards, growling. When the snake lunged, they sprang back. This was repeated for about 10 minutes.
Tertius had a ringside seat from his vehicle. Focusing on the snake’s classic profile and flicking tongue, he also caught the expressions of fear and aggression among the meerkats. Finally, the cobra gave up and disappeared down a burrow into the warren. The meerkats reunited and scurried away. Photo by Tertius-A-Gous/2018 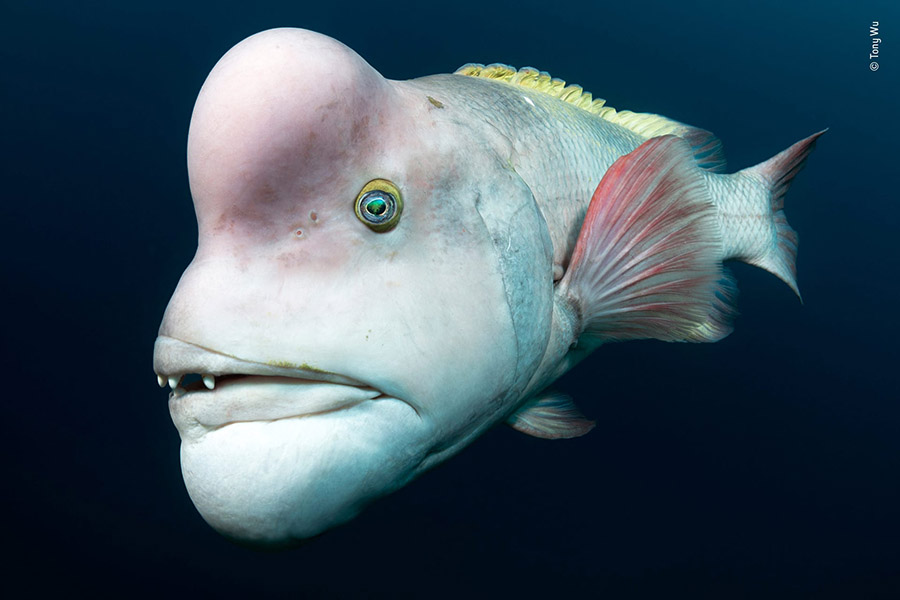 Tony travelled to Japan’s remote Sado Island to capture this image of an Asian sheepshead wrasse.
Individuals of this species start out as females, and when they reach a certain age and size (up to a metre long) they can transform into males.
Long-lived and slow-growing, the species is vulnerable to overfishing. It favours rocky reefs in cool waters in the Western Pacific, where it feeds on shellfish and crustaceans, though little more is known about it. Photograph: Tony Wu 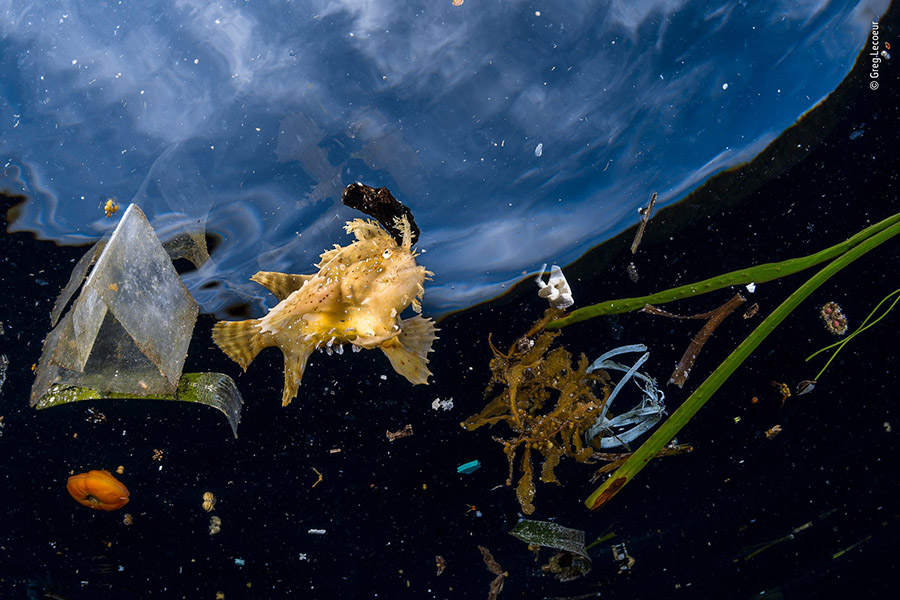 Underwater On the sandy seabed off the coast of Mabini in the Philippines, a yellow pygmy goby guards its home – a discarded glass bottle. It is one of a pair, each no more than four centimetres (one and a half inches) long, that have chosen a bottle as a perfect temporary home. The female will lay several batches of eggs, while the male performs guard duty at the entrance. Photograph: Wayne Jones

A single juvenile red-footed booby, circling northeast of D’Arros Island in the Outer Islands of the Seychelles. These ocean‑going birds – the smallest booby species, with a metre-wide (3-foot) wingspan – spend most of their time at sea, flying long distances with ease. Sharp-eyed, they swoop down to seize prey, mainly squid and flying fish. Their bodies are streamlined for plunge‑diving – nostrils closed and wings pinned back – and nimble enough to grab flying fish in mid-air. Photograph: Sue Forbes
Share