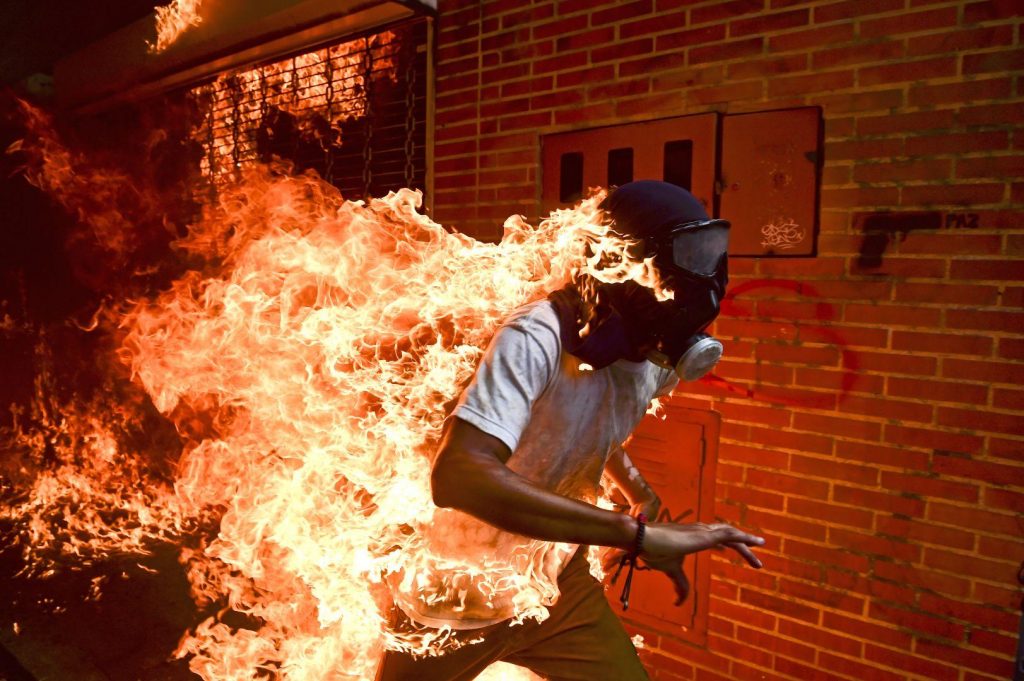 AFP photographer Ronald Schemidt has won this year’s World Press Photo of the year award for his photo entitled ‘Venezuela Crisis’.
The shocking photo shows José Víctor Salazar Balza (28) on fire amid violent clashes with riot police during a protest against President Nicolás Maduro, in Caracas, Venezuela.
Salazar was set alight when the gas tank of a motorbike exploded. He survived the incident with first- and second-degree burns. Schemidt (b. 1971) is a staff photographer for Agence France-Presse, based in Mexico.
Magdalena Herrera, director of photography Geo France and chair of the jury, said about selecting the World Press Photo of the Year, that the photo of the year has to tell an event that is important enough, and that it had to bring questions.
“it has to engage and has to show a point of view on what happened in the world this year,” she said.
Jury member Whitney C. Johnson, deputy director of photography National Geographic, said the photo was symbolic.
“The man, he has a mask on his face. He’s come to sort of represent not just himself and himself on fire, but sort of this idea of Venezuela burning.”
Jury member Bulent Kiliç, chief photographer Turkey Agence France-Presse, also added:
“And there is one small detail in the picture. There was a gun on the wall. It reads “paz’. It means peace. That also makes this picture strong.”
The prize-winning photographs are assembled into an exhibition that travels to 100 locations in 45 countries and is seen by more than 4 million people each year. The winning pictures are also published in the annual yearbook, which is available in multiple languages. The first World Press Photo Exhibition 2018 opened in De Nieuwe Kerk, Amsterdam, on 14 April 2018.
Share